Was an interesting and noisy night generally, five other great experimental/electronic bands played - John Barnes, HL, Snork Maiden, Cancelled and Spider Kitten. (the latter two the wrong way around in the article to the left!) Dr. Age ineptly DJ'd videogame music in between acts. 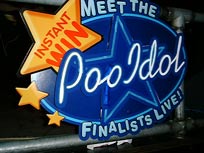 Sir Concord Discount reports:
In what was a noisy and splenetic night all round, local darlings Cementimental took to the stage to both destroy AND rebuild the audience's minds.

The set was total nuts - we produced the classic slabs of noise and bursts of static insanity with the various mad-folk leanings that have developed of late. We featured much new material- some of it planned, some improvised and even two from the new album. Mrs. Columbo and Sir Concord Discount wowed the audience with their touching performance of 'Rumbelows Blues' whilst Dr. Age prepared his devices for brainkill. Murray the Eel joined us on stage to sing on "Lloyds' Dates," then the stage was invaded by a professional wrestler. Don't know who - possibly the Undertaker? Things were finished off with a awesome rendition of 'Harrison Ford' that literally quadraspazzed the crowd. Then we left. 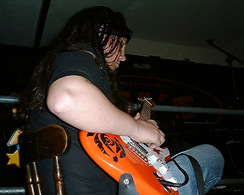 More photos and video in due course, including wrestling and more.

This was the poster:

More info on this whole Newport 'scene' (?!) on the No Ground Processes site.

back to the cementimental index